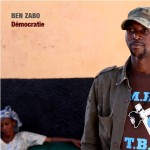 Following the slamming success of his first European tour, Malian Afro-rock pioneer Ben Zabo returns with a 31-minute digital-only EP. Diverse and forward-looking the EP includes three new songs, both “Mark Ernestus Meets Ben Zabo” mixes (only available till now on an out-of-print 12″) and a dance-floor heavy reworking of “Dana” by Harmonius Thelonius. The horn-driven title track “Democratie” is a breathless and passionate plea for sensible democratic leadership in Ben’s troubled homeland Mali. Ben’s much-awaited new album will appear in the spring of 2014. 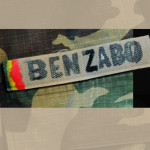 Malian Afrobeat may be two words that you don’t hear together very often but 2012’s most exciting new Afrobeat band may well be hailing from Bamako, Mali. Named after their bandleader, Ben Zabo, they are about to release their self-titled debut album, full of funky and gritty tunes, wonderful musicianship, and songs of peace and hope that could not be more timely or necessary. The album is also a testament to the lesser-known culture of the Bwa people; it is the first international release of a Malian of Bo descendant with all songs in the Bo language and rhythms.

Born into nobility in 1979 in the Segou region of Mali, Ben (real name Arouna Moussa Coulibaly) chose music as a career because of his passion but against the wishes of his parents who wanted him to pursue a career as a pharmacist.

In 2007, whilst trying to establish himself as a guitarist, singer and songwriter, Ben also started working as an assistant sound engineer at the famous Studio Bogolan in Bamako. It was in this studio that he first met Peter Weber, owner of the German-based Glitterhouse Records, and Chris Eckman, American music producer, leader of acclaimed US band The Walkabouts, member of Dirtmusic, and collaborator with Willard Grant Conspiracy and many other bands. Weber and Eckman were at the studio on several occasions, to record Tamikrest’s albums ‘Adagh’ and ‘Toumastin’, Dirtmusic’s ‘BKO’ and the late Lobi Traoré’s ‘Rainy Season Blues’. They were blown away by Ben’s enthusiasm, drive and talent. Weber agreed to record and distribute Ben Zabo’s debut album for the international market, with Eckman producing it, again at Studio Bogolan.

“Much of the Malian music that has been released on European and American labels in the last few years shares one thing: it is mostly down-tempo and reflective. The kora majesty of Toumani Diabate, the Songhi blues of the late Ali Farka Toure, the singer-songwriter tropes of Rokia Traore and the dusted, acoustic meditations of Tinariwen (on their most recent album) are a demonstration of this point. Even the later albums of the once exuberant Salif Keita have grown more melancholy and ethereal. The music of Ben Zabo is a clear break from this quietude. His music is a string of firecrackers igniting on the dance floor of a midnight party. It is a music that has been perfected in the loud, sweaty, open-air clubs that line the outskirts of Bamako, places where the competition to get heard is fierce, and the chances of moving upward and outward are next to none. When I first came across Ben’s music it seemed unlike any contemporary Malian music that I had heard. Its direct physicality, its polyrhythmic complexity and its raw but focused energy set it apart. But as I dug more into Mali’s musical past, I realised there are antecedents for the music Ben and his band create. In the 70’s and 80’s, like in much of Africa, musicians in Mali were creating a powerful, and at times edgy musical fusion that brought together traditional rhythms and chants with the urban (and often western) sounds of the fast growing cities. Electric guitars and James Brown motifs stood side by side with age-old storytelling. It was a music made out of a complex dialogue: the village reaching to the city and the city reaching to the village. And while it would be too simplistic to gather all such music under one name, due to Fela Kuti’s pan-continental influence and his coinage of the term, much of this music came to be known as Afro-beat. In Mali, during that fertile time, artists like Moussa Doumbia, Le Super Djata Band du Mali, Super Biton de Segou, and Sory Bamba and his many groups (especially L’Orchestre Kanaga de Mopti) were articulate, original purveyors of this cutting-edge musical experiment. Just to satisfy my own curiosity, I once asked Ben Zabo if he had ever listened to Afro-beat and its Malian offshoots. His face lit up and his answer was quick and to the point. “I have listened to too much Afro-beat!” he said, grinning. He went on to acknowledge the deep debt he felt towards the musicians (of all stripes) that have come before him. On another occasion Ben proudly told me that his Malian “Afro-beat” forbearers Super Biton de Segou and L’Orchestre Kanaga de Mopti, had both incorporated the unique Bwa rhythms from Ben’s own minority ethnic group, the Bo people, into some of their classic songs, even though those artists were from a different ethnic background. With the release of Ben Zabo’s self-titled album an older tradition is renewed and an uncharted path begins. Mali’s Afro-beat past is fused with the pulse of Bamako in the new millennium and the rarely heard sounds from the Bo musical culture. This album is the first album ever to be released by a Malian of Bo descent. Because of this, Ben routinely refers to him and his band as “musical warriors.” In this chaotic and often indifferent world, they are fighting to have their voices heard, their rhythms felt and their cultural legacy recognised. They are funky, charismatic and committed. They are not going to give up easily. Bwa power has arrived!”

What is Bwa power?

Ben Zabo and his band have a mission which they intend to accomplish through their music. It is to promote their Bo culture at a national, African and international level with music, dance and Bwa traditional apparel. The name “Ben Zabo” means “son of Bo and Bambara” in Bomu etymology, evoking his belonging to the double cultural identity Bambara and Bo. While perpetuating the traditions of his native Bwatun, Ben Zabo developed a mixed style of rhythms and melodies of Bwa in which one can detect sounds and influences from other modern and western musical styles: Afrobeat, funk, reggae, blues, rock and even jazz. With modern instruments and musical arrangements that highlight his intimate songs, his music is also enriched with Malian instruments such as balafon, tama and the ara’o bara, etc.

Ben Zabo’s songs are mostly written and sung in Bomu, his mother tongue. The Bwa are an ethnic minority group living in a small territory called Bwatun (Bwa country), which straddles the border between Mali and Burkina Faso. The Bwa of Mali occupy the area southeast of the Segou region, specially encircling San Tominian and serves approximately 216,000 people. The rhythm of the music of Ben Zabo encourages dancing. It is both an expression and assertion of cultural identity. It is also the voice and form of a social conscience and ethical pride.

In his compositions, Ben Zabo develops themes relating to social values such as brotherly love, peace, justice, tolerance, solidarity, work and good governance. All of those are for him sustainable human development factors, which remain the only guarantee of integrity and social cohesion.

At the same time he strongly denounces greed, hypocrisy, discrimination and demagoguery, the principal evils which undermine the stability of our society and deprive some citizens of freedom, dignity and well-being. On the political front, Ben Zabo encourages all African countries, especially Mali, to become more involved in a true democracy and freedom of people. That every individual and every people have an inalienable right to speak and the sovereign decision of their own destiny.

For women, they are not forgotten in the songs of Ben Zabo: a tribute to them is made – to all the mothers of the world – for the suffering they endure while giving birth. He also writes about their beauty, bravery, love, charm and tenderness.

The music is for Ben Zabo and all his musicians, an important niche for the accomplishment of the mission with which they feel invested: the culture Bo out of the shadows to reveal to the world through music , dance, traditional outfits and instrumentarium Bwa against the Malian and African culture in general.
Originally from the traditional Ben Zabo music is a blend of rhythms and melodies Bwa in symbiosis with modern sounds and harmonies.

While perpetuating the traditions of his native Bwatun, he chose to develop a mixed style in which we detect as much influences from other musical styles such as modern and Western afrobeat, funk, reggae, blues, rock and even jazz. With modern instruments and musical arrangements that are perfectly well worth his intimate songs recorded in the news, his music is also well steeped in the rich instrumentarium Mali as the balafon, the tama, the ara’o bara and so on.

In his compositions, Ben Zabo develops themes relating to the various societal core values ​​such as brotherly love, peace, justice, tolerance, solidarity, work and good governance, which according to him remain the only guarantee of integrity and cohesion, sustainable human development factors. At the same time, he condemns the indiscriminate fervor and rigor, greed, hypocrisy, demagogy and discrimination are the main problems which undermine the stability of our society and confiscate the freedom, dignity and well being of some citizens.

Under the political commitment, the vision of Ben Zabo is to encourage all African countries, especially Mali to further implement a true democracy and true freedom of the people. That every individual and every people have an inalienable right to speech and decision souverraine of his destiny.

Finally, women are certainly not outside in the songs of Ben Zabo a fitting tribute because they are made​​, – to all the mothers of the world-for the suffering they support giving life. On the other hand, the beauty, bravery, love, charm and tenderness of women are discussed at length.

Zabo Ben’s songs are mostly written and sung in Bomu is his mother tongue. The Bwa, in fact, constitute a minority ethnic group living in a small area called Bwatun (Bwa country) straddles the border between Mali and Burkina Faso. The Bwa of Mali occupy the area south-east of the Segou region, just circles and San Tominian and serve approximately 216,000 people.

The music of Ben Zabo room is very encouraging because his rhythm to dance. It is both the expression and assertion of cultural identity, and finally the voice as a social conscience and ethical proud.